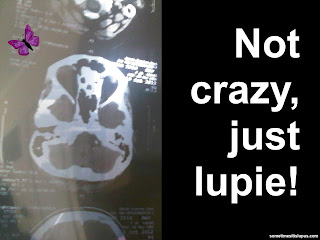 I had the appointment with the gerontologist who looks after my cognitive issues. (See previous post.)  Because the government is allowing telehealth appointments under Medicare  now, I was able to see her over FaceTime and not have to go into Brisbane.

Here's the good news:  I don't have dementia, just still the mild cognitive dysfunction of lupus.  That huge thing I freaked out about forgetting, she said, was just my brain responding to extreme trauma. Apparently my brain just decided to deal with it by not dealing with it. She's sending me to a psychologist to deal with that.

The bad news: my cognition is such that she wants to limit my driving to just my local area and just during daylight hours.  Which means, while it's not dementia, it's still nothing fantastic, and my world is getting smaller.

The other news: she's changing a number of my medications to ones that are more memory-friendly, including one that's not on the PBS (ie not government-subsidised), so I'll have to pay full price.  It's going to take a few weeks to wean off one medication and go on to the replacement, which is always an adventure.

She also says it's about time for me to do a new sleep study. I don't know if things like sleep studies are still going on right now, but some time in the future, that needs to happen.