I got the quote to get my tooth fixed, $2700.  Then I went to my health insurance company to find out how much was covered: none. That's major dental, and I'm only covered for basic dental.

Guess what?  It looks like I'm just going to keep having an empty space in my mouth, and keep getting food stuck in my gum until I learn how to eat without using that part of my mouth.

In a sense, it's my own fault I don't have a health insurance that covers this.  I recently gave up my hospital cover, deciding to trust the public system, and just kept basic extras cover.  The reason for this choice was simple:  I just couldn't afford it, and the public system has always been there when I needed it.  (A couple of times I've been rushed to an emergency department in severe pain and had surgery within 24 hours - for service like that, I'm happy to wait my turn when whatever I need isn't urgent.) When I've been able to afford hospital cover, I've opted for the private system to leave space for someone who needed the public system.  I've just had to come to the decision that I can't afford the private system anymore.  (Isn't it wonderful to be in Australia, where we have that choice?)

I could have chosen eat less, or sell my car, or give up my pets, to keep the hospital cover, but I chose to sacrifice the insurance - however with hospital insurance, went the "major dental".

Extras cover, I could keep for about $30 a month.  Now, I am trying to decide if it really is necessary.  With a chronic illness, I can get some ancillary treatment on a teamcare program managed by my doctor.  I can get up to five free visits to a physiotherapist, dietician, psychologist or podiatrist each year.  That doesn't cover optometrists, and the previous chronic illness dental program has been axed.

I've checked, there is a government program for glasses, but it doesn't cover graduated lenses.  And there is a community dental program.

If I just saved the money I've been paying in extras cover, I might just about cover the difference between what's available publicly and what I have now anyway.

So the question is: is health insurance worth it at all, particularly for a middle-aged woman, with a chronic illness, living on a low income?

A great place to compare health insurance policies, without having anyone try to make money from you is the government comparison site: http://www.privatehealth.gov.au/.  After looking through, I can't find any that I can afford that would do everything I need.

So, I've given up hospital cover, and while I'm thinking about it a bit longer, I'm leaning toward giving up extras cover as well.

If I were designing a health insurance policy for someone in my position (middle-aged woman, with chronic health issues, living on a disability support pension):  it would include, all dental (forget major/minor - just teeth stuff done by a qualified person up to a set limit); all the usual things that are possible with ageing and with chronic illness (so everything from hearts to joints to brains); it would cover physiotherapy, psychology, eyes, dietetics and pharmacy.  It would not cover pregnancy, assisted reproduction and random alternative therapies. There seem to be lots of cheaper policies aimed to get young people into health insurance, but there don't seem to be any affordable ones for people at my life stage.
Posted by Iris Carden at 14:04 11 comments:

Email ThisBlogThis!Share to TwitterShare to FacebookShare to Pinterest
Labels: money

It's OK to be Unreliable 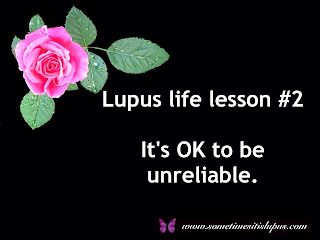 One of the things I really hate about lupus is that I am unreliable.

It's not just me.  When I asked what other lupies had learned from lupus, there were a couple of people who responded about being unreliable.

We feel guilty and frustrated because we have to cancel plans.

Our friends and family may get frustrated or upset with us for constantly cancelling plans.  Some of them even give up making plans with us.

Their response makes us feel even more guilty and frustrated.

If they stop making plans with us, it also helps make us feel more isolated.

It's time for a line from my Granddaughter's favourite movie: "Let it go."  (Actually, my Granddaughter thinks the movie is named, "Let it Go", but that's a different story.)

We're going to be unreliable. We're going to plan for things and then be too sick to do them.  But that's no reason to stop planning things.  Beating ourselves up isn't going to change anything.  So we just have to accept that we will miss out on some things, but if we keep making plans, we will get to enjoy actually doing some of them.

We are responsible for how we react to our own being unreliable.  We are not responsible for how other people react to it.  Their thoughts, feelings, and actions are their own.  We don't control them. If they can't come to terms with a friend or family member being sick, that's their issue.
Posted by Iris Carden at 13:35 No comments: 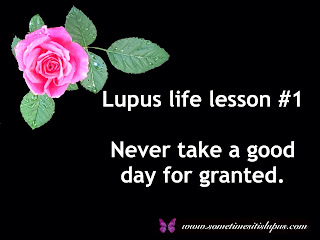 It's confession time.  I may not be quite as well as I've been telling you (and myself) lately.  With my effort at eating properly and exercising almost daily,  I don't seem to have the energy to do much else.  I'm not writing much, and I'm sleeping 12 to 14 hours a night.

What I have been feeling is less pain.  And less pain is good, extremely good.

So while I can I'm going to make the most of the low pain days.

You see, lupus has taught me a lot.  One of those things is that a good day is a rare and precious thing.  It should never be taken for granted.

So while the good days last, even if I end up going to bed at 5pm, I'm going to continue trying to get my health into the best possible state before my next flare.

I recently asked on Facebook what lessons other lupies had learned from lupus, a lot are things I have also learned. I'm going to share those over the next few days. Lupus has taught us all a great deal - mostly things none of us ever wanted to know.