If you have a favourite health activist - a blogger, a tweeter, a Google plusser, a Facebooker, anyone who informs, or entertains with regard to your health issues, nominate them now.

The categories this year are:

Many of you lovely lupies go to multiple sources for information, support, understanding, finding someone who just "gets it".  Here's your chance to nominate the best of them.

(If you nominate someone I might not have heard of, please add a link in the comments on this post, so I, and other readers, can find out about them too.) 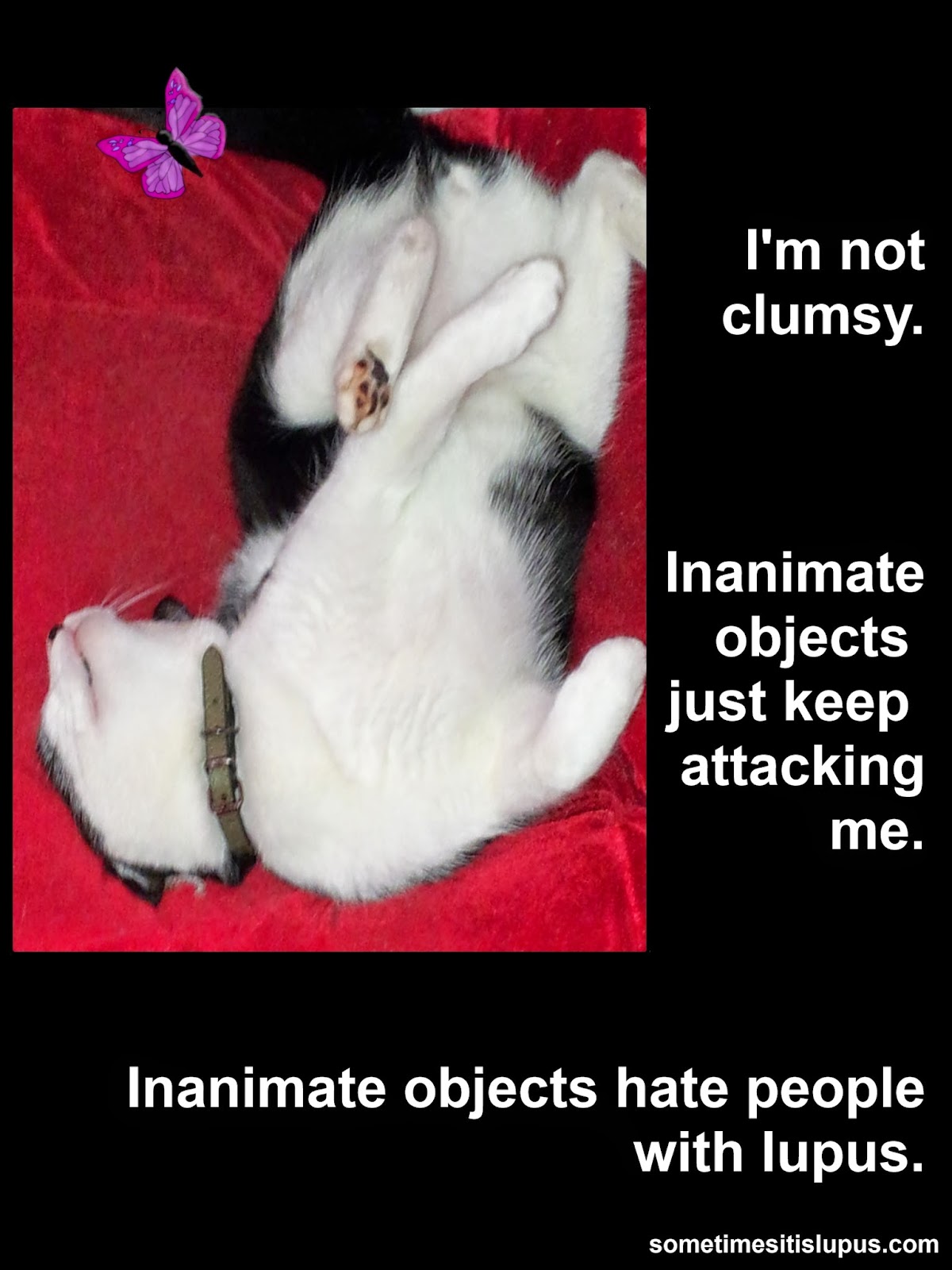 I had my soft drink all over the table, the chair, the floor, and myself.

My son asked what on earth I was trying to do.

"I was just putting the cup down on the table," I said.

Well, I think what happened was that the cup leaped out of my hand, did a quadruple somersault with a fancy twist at the end, and pirouetted to a stop, upright but empty, on the table. In the process, it managed to disgorge its contents, which clearly increased in volume from 300ml to 3 litres while flying through the air in all directions.

Why did this happen? Because I have lupus.

Cups, like many other inanimate objects, have an intense dislike of anyone with lupus.

A non-lupie can put a cup on the table, and the cup will simply sit quietly and compliantly where it was placed. It will feel no need to engage in any feats of acrobatics.

However, when a lupie puts a cup on the table, the cup and the table both conspire to do whatever they can to make the lupie's life miserable.

This terrible behaviour is not limited to cups and tables. No. Almost all inanimate objects have a grudge against people with lupus.

Bottle lids will refuse to come off for us.  (Pill bottles are the absolute worst.  No pill bottle ever opened easily for a lupie.)

Doorways, on seeing a lupie approach, will suddenly move 30cm to the left, or the right, whatever they think is the opposite of what the lupie is expecting.  I have lost track of the number of times I have walked into walls or doorjambs because the doorway has suddenly jumped aside as I was about to go through it.

Even the ground is unstable for us.

The other day I went to put some new herb plants in the garden. I put on my gum boots and gardening gloves.  I should have invested in heavy duty overalls. Some very localised earthquakes (which affected no-one in the world but me) caused me to fall into the garden bed three times.  I was covered in dirt everywhere except my hands and feet. (Those gardening gloves and boots were a good investment.) And I had a whole new set of bumps and bruises.

I can't tell you what it is about lupies that inanimate objects find so objectionable that they must attack us at all times. I wish I knew, because then perhaps there would be a way to find grounds for a truce. What I can tell you is there are a lot of inanimate objects in the world - which makes the world a very dangerous place for people like me.
Posted by Iris Carden at 08:47 No comments:

Well, I did only go overseas for two weeks. It's a while since I got back.

I needed a bit of recovery time, and then there were some family and health crises (not all the health crises were mine for once.)

So, as an intrepid lupie world traveler, I've had quite an adventure, and I don't know where to begin telling you the stories of what happened.

I guess I'll start with the discovery that wheelchairs don't bounce.

You wonder why I tried to find that out?  Well, actually it wasn't me who did the experiment. But I did provide a brand new wheelchair for it.

I'd bought a wheelchair with the trip in mind. The theory was that if I was pushed around in a chair instead of walking (limping) I would have the energy to do more. This actually worked out quite well, despite the hiccup.

My family pushed me through Brisbane International Airport in my own chair.  At the door of the plane, my chair was taken away.  In the stop-over airports I was transported by airport staff in the airport's own wheelchairs to my connecting flights. (This, in itself, is a great reason to take a wheelchair on a flight. It meant my family had a guide to show us where we were going getting from one gate to another.)

At Manchester, the final stop, the airport wheelchair was awful. The airport staff didn't push this one, but gave it to my son to take me, saying that it would be a while before someone was available and we'd be faster on our own.  The wheels of the chair seemed to have come from the same factory that produces those shopping trolley wheels that go in four different directions at the same time.

My son struggled and I got frustrated, and we were both incredibly glad to pick up my chair from the baggage collection point.

My chair was so good in comparison to the airport one that we didn't even notice that it wasn't behaving as well as normal.

We passed a sign that said, "Check your luggage, no complaints accepted after this point." We'd been travelling for 24 hours straight. We had all our bags. Nothing was obviously wrong. We left the airport.

The next day, the family went for a walk through the streets of Frodsham to the local park.

Family members took turns pushing my chair, and complaining about the rough footpaths, especially the sections that were cobblestones. (Cobblestones may be very pretty, but they're not good for wheelchairs.)

It got worse a it went on, and then we discovered that one of the front wheels wasn't straight. It was bent under part way.  We were all muttering about just how horrible British footpaths were.

Eventually the front wheel collapsed all the way, and I had to walk back to my sister's house.

My sister asked around and found that a place called Motability would be able to fix my chair. We went in to the place suggested, and handed my wheelchair over to be examined.

The diagnosis for the chair: it wasn't damaged by the street. It had received a hard knock, probably from being dropped from a height.  The repair people strongly suggested airline baggage handlers had something to do with it. The frame was so badly damaged, it couldn't be repaired.

I bought a red reconditioned chair from them for 50 pounds, which meant we were free to continue the holiday.

And having a chair for trips to all the amazing places we went really was worth it.

So, dear lupies, if you're planning an overseas holiday, taking a wheelchair is a great idea. Just don't buy an expensive new chair to take with you. Get the cheapest one you can buy, second-hand is fine.
Posted by Iris Carden at 21:35 1 comment: