Howling At The Moon

For the past couple of weeks, I've been sleeping about 14 hours a night.  I've still been so tired, I've still napped through the day.

I've had no energy while I've been awake, and have managed to watch (read 'snooze in front of') nine seasons of Supernatural.  That's how many are available on Netflix here in Australia.

In my brief waking moments, it's occurred to me that life with lupus is a bit like an episode of Supernatural.

There's definitely something sinister going on.  There's a big, bad wolf loose, and it's not satisfied with just howling at the moon.

The wolf might be just injuring most of us, but it's also killing lupies. It's vicious, unpredictable, and not a part of most people's normal experience.

There's no miracle cure.  In fact, no non-miraculous cure.


We use medication to ease the effects, but there's no guaranteed way to prevent the wolf attacking at will.


We have some symptoms that just don't make sense to anyone.


And sometimes the symptoms can affect how we feel about ourselves and how we present ourselves to others, as well as our physical health.

Unlike Supernatural,  a couple of guys armed with silver bullets, rock salt and holy water won't come to rescue us.  We count on people like our doctors.


And we rely for support on other lupies, people we know have been to hell and back, and are still working on being their own heroes, and ours.

Many of us find our best source of strength in our families and our friends.

But when it comes down to it, we frequently have to stand up to the wolf ourselves, and be our own heroes. 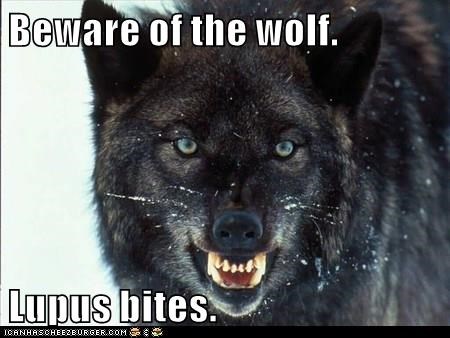 I guess this post is what happens when I spend the best part of a fortnight sleeping in front of the same television show. It probably could have been worse (though I'm not sure how.)  Anyway, it's 7.30pm and I'm exhausted.  Good night world.