My process for permanent retirement has gone through, and suddenly for the first time in my life I was faced with the issue of what to do with a lump sum of money. 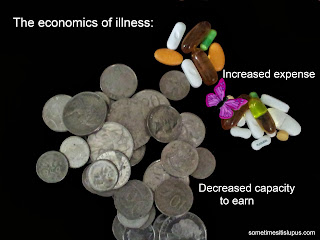 Obviously, the first thing was to clear all my debts.  Not paying interest on debts will make a huge difference to my regular budget.

Next was to lock away the majority of it in a long-term investment that will pay me some interest.

And then to have an "emergency fund" for those crises that in the past a credit card would have covered, things like medical expenses that I hadn't counted on and emergency trips to the vet with my animals. (No more credit cards for me.)

My son came with me for the run around to the banks, sorting things out. He made notes for me, and understands my whole financial plan probably better than I do.  He says he's not looking out for my interests, he's just protecting his inheritance. My daughter's also been told all of the details. So if my cognitive function gets worse, there's people around me who know what I'm doing (even if I don't).

So that's all good news for me.

Along the way, I learned a few things that might be useful for other people who've had to give up work because of illness. (Some of which may also be helpful for people who are still working.)

When I went from working to being on a Disability Support Pension, I didn't think to notify the bank of the change.  I should have.  If you're on a DSP and still using a regular bank account, it's a good idea to go to the bank to change over to a specific pension account.  Centrelink has a "deeming" process.  They deem your savings to earn a set interest rate, and count that as your income, whether or not you actually earn that interest. In response to this the banks have set up pension accounts, which earn the "deeming" rate.  This is higher than the regular savings account rate.  You will need to show your pension card to get your new bank account.

It's important to ensure your bank has your Tax File Number. I hadn't even thought of this.  I had a bank account long before the time when banks started collecting tax file numbers.  (OK, I'm clearly getting old.) If the bank doesn't have your tax file number, it has to withhold tax from your interest at the highest possible rate.

Have a plan for what happens if you get too sick to manage your money. You need to decide who you trust to manage your affairs if you can't manage for yourself.  This applies to health and personal decisions as well as financial decisions. Are you going to make a formal Power of Attorney? Are you just going to give a close family member or friend the access code and password for your on-line banking (and trust that next-of-kin will manage personal/medical choices appropriately)?

Email ThisBlogThis!Share to TwitterShare to FacebookShare to Pinterest
Labels: money

There was a story on 612ABC radio about a man whose friend put a notice in a shopping centre notice board asking for a girlfriend for him.  He was a nice guy, according to the female friend, who was concerned that he just wasn't be able to find love.

I tweeted to the radio station: "You didn't embarrass that man enough, you forgot to broadcast his phone number."

They tweeted back, they'd direct message me the number if I was interested.

I thought about it for a while, decided I had nothing to lose, and got the number.

We texted a couple of times, then met.  He talked at me constantly and gave me the history of a number of city buildings I really wasn't interested in.

After that, my kids persuaded me he was probably just nervous about the first meeting, and I should give him another chance.

So I met him a second time. Again, he talked at me constantly, and there was no sign of the monologue growing into a conversation.

That's when I told him I really didn't think it would work out.  He texted a few more times, and after I got tired of answering "no", I just stopped answering. Eventually, he stopped texting. I deleted his number from my phone.

End of story. Or it should have been.

His current girlfriend found my number in his phone.  She's been calling and texting me constantly. She's used at least three different phone numbers so far.

Initially she claimed she'd found him cheating on her with several women. (I find it hard to believe that several women at once would want a relationship with this particularly boring man, but who can say what others' tastes are like?)

So, initially, I had politely explained that I'd only met him a couple of times and that was a long time ago. For any rational person, that would have been the end of that.

Now, I'm just getting constant barrages, of "Have you seen John?" "I found your number in John's phone", etc.

I thought of changing my phone number, but the effort of letting everyone who has a legitimate reason to contact me of the new number is just far too much brain work for someone with my current brain fog issue.

I tried explaining that I'm sick, and at this point in time there is no way I could handle dating anyone, and that all I want is to be left alone to be with my kids and my soon-to-be-born grandchild.

That didn't stop the texts and phone calls.

Since then, I've just been ignoring the text messages, and hanging up and blocking numbers when I realise calls are from her.

Hopefully, she'll eventually give up contacting me. After all, John gave up after a while.

Apart from needing to rant, I think, it's a reminder that for everyone with lupus who is going through all the rotten things that this disease throws at us, there's still everyday life going on. Everyday life can throw its share of rotten things at us too. It just all adds up.


PS - I've just ordered a portable tens machine.  It is battery operated and can clip onto a belt. That means I can be wired up to a tens machine while I'm out of the house, not just when I can be plugged into the machine here. That's extra pain relief for trips to the supermarket, or movies, or well, just about anything!  (I'll show you a picture when it arrives, and tell you how well it works.)

Email ThisBlogThis!Share to TwitterShare to FacebookShare to Pinterest
Labels: random

I struggled to come to terms with the idea that a walking stick would be helpful.  But now I have one and have been using it for a while, I've found it's got endless purposes.

So far I've used it for:

Here's two gluten-free cupcake recipes I made for my daughter's birthday yesterday.


One is based on the Chocolate on Chocolate Cake recipe I shared earlier in the year.

The other is a variation on the orange and almond flourless cakes which are so often the gluten-free cake option at coffee shops.

Both of these cupcakes can be stored in the freezer.
Posted by Iris Carden at 12:26 1 comment:

Gluten free, low lactose and freezeable, this is one of my family's favourite desserts.  It's rich, dense, and if warmed before serving very gooey. I usually make a double batch and freeze them. 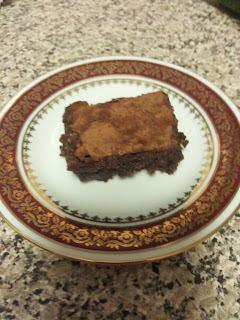 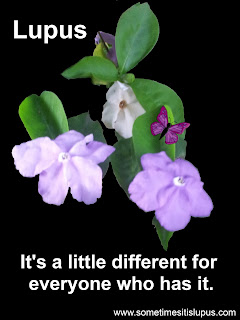 Sometimes I get mad at myself.  Other people with "mild" lupus are still able to keep working, why couldn't I?

I'm frustrated of course.  I've just been advised my application for permanent retirement has been approved.  A very big door has just closed.

Really, I'm sure retiring at 47 must be someone's ambition. I'm living the dream, right? Well maybe not in quite these circumstances.

As it is, I was comparing myself to other people. I was thinking that I'm clearly not as tough as other lupies.

Then my physiotherapist, valiantly trying to improve my tendonitis in my left hip said: "It's good that you have such a high threshold for pain."

Maybe I'm not such a wimp after all.

Maybe I shouldn't try to compare myself to other people who have lupus.

After all, the one thing that seems consistent about lupus is its utter inconsistency.  No two people have exactly the same symptoms. We all just do the best we can with the limitations we have.
Posted by Iris Carden at 17:25 2 comments: