Been in a Clinical Trial? Researcher Wants to Hear from You

Hi lovely lupies, I received the following request for people who have participated in clinical trials to take part in some research.  If you are interested, please contact Jessica directly, via her email address.

I hope this note finds you well! I came across your wonderful blog Sometimes, it is Lupus and wanted to reach out to you for assistance for a project.

My name is Jessica, and I work at The Center for Information and Study on Clinical Research Participation (CISCRP), an independent non-profit organization based in Boston, Massachusetts. CISCRP is dedicated to educating the public about clinical research; as part of our mission, we regularly engage with patients through advisory board meetings, global surveys, and workshops to include the patient voice in research endeavors.

At this time, CISCRP is planning to conduct a series of 1-hour telephone interviews among individuals who have participated in clinical trials and we were wondering if you might be interested in this opportunity. During the interview, you would be asked to reflect on your past clinical trial experiences and to provide feedback on patient-facing materials being developed to help guide patient discussions around participation. As part of this project, we are looking to conduct telephone interviews for individuals diagnosed with Lupus that live in Australia that have participated in a clinical trial.

The goal of the interview is not to recruit patients for clinical trials, but rather to learn from patients about their experience and to provide feedback in order to benefit future patients and minimize the burden of clinical trial participation.  As a thank you for your time, CISCRP will provide honoraria to those who are eligible and participate in the telephone interview.

Through searching your blog, it is my understanding that you have not participated in a clinical trial, however, I was wondering if you might know of anyone who would eligible and interested in this opportunity. Any assistance you can provide would be greatly appreciated!

Warm regards and thank you in advance for your time and consideration!

Email ThisBlogThis!Share to TwitterShare to FacebookShare to Pinterest
Labels: research 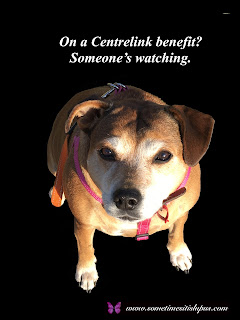 There's a lot of things I hate about living with lupus.

One of those things is relying on a Disability Pension from Centrelink.

I don't like the feeling of being dependent. I also miss being able to pay taxes.  That probably sounds weird if you're one of those people who would do anything to avoid or minimise tax, but I really love education, healthcare, police, courts, all those amazing things taxes pay for.  As well as feeling dependent, I'm upset that I'm not paying my way.

I can't go back to work, because I never know when I'm going to be sick, and no employer wants an employee who needs a fortnight to recover from a day's work.

So, I thought I would try to do things in a small way, to work towards reducing my dependence.  I write my books, but those haven't yet made a profit.  I had a couple of attempts to monetise my blogs, but gave that up as pointless.

Half way through last year I started putting aside $50 a fortnight to buy shares.  A month or so ago, I bought my first $600 worth of shares. That's not high finance, but over time, I hope it will make a difference.

Doing the right thing, I added the shares to my list of assets with Centrelink.

A week later, I received a letter from Centrelink, demanding statements for my bank accounts, and asking, in these exact words: "Where did the money for all these shares come from?"

Yes, that princely sum of $600 is enough to make Centrelink suspicious I was doing something dodgy.  I had to detail every cent I owned, and explain my budget and how I managed to save that massive amount of $600.

I haven't heard from Centrelink again since then, and my pension wasn't stopped, so I guess they have accepted my explanation.

But here's the thing: if I'd spent $50 per fortnight on alcohol or gambling, Centrelink would neither have known or cared.  Instead, I spent it on trying to be financially responsible.  That doesn't fit the stereotype of someone on a Centrelink benefit, so it was suspicious.

The government's been experimenting with a cash-free welfare card, with the idea that people on welfare have to have everything they do controlled by someone who knows better.  Support for that comes from the stereotype that people on low incomes can't manage money.

In real life, people on low incomes have to know more about managing money than people on high incomes.  We learn because we have to make every dollar stretch to its maximum; it's the only way to survive.

I've done it all wrong, again

Hi sometimesitislupus.com
In today’s digital world if you want to stay ahead of competition, you should always be prepared to overcome new updates by Google and be ready with new strategies to implement.
I have a complete analysis report ready with me which shows your website needs immediate improvement. Some of the points are mentioned below:
Our experienced Google Analytics professional understand all recent updates. We will prepare an advanced digital marketing campaign to generate maximum traffic and boost your search engine ranking.
For more details please reply. We have 24*7 supports, so you can contact any point of time with your website issues.
Thanks & Regards,
Linda XXXXXX

If you’d read my site you would realise that I usually make fun of emails such as yours for the entertainment of my readers.

Let’s look at your complaints, starting with content quality.  This site is about my life as a person living with a chronic life-endangering disease.  I’m sorry if you don’t find my life of sufficient quality for your standards.  You are not my target audience.  Other people who do live with lupus understand and relate to my struggles.  Some of them even find some comfort in finding they are not alone facing this horror that our lives have become.

Relevant keyword phrases are not visible of first page listing.  I don’t know what you think is relevant.  If you were looking for the keyword “lupus”,  you’d have found it.

Now on to HTML errors, on-page and onsite issues.  Well those aren’t me.  That’s the blogger platform.  You should address your suggestions to Google, since they do that bit.

The website isn’t search-engine friendly.  Yet somehow you, who clearly don’t even know what it’s about, found it.  Again, all the technical bits are run by Google, so tell them what they need to do to make their stuff search engine friendly.  I’m sure they’ll find you just as amusing as I do.

Then there’s the unauthorised links.  I own this blog and I write it.  Anything I put on it, I authorised.

And now, can I make a suggestion to you?  If you want to look professional, and pretend you are part of an organisation (as in “our experienced….”) perhaps you could have something other than a personal gmail address?