I'm home.  For a little while I wondered if I'd make it.

If you're in Australia, you've definitely heard of Tropical Cyclone Debbie. That didn't come anywhere near my area.

But what happens after a cyclone has crossed the coast and burned out most of its energy, is that it turns into a rain depression.

Lots of rain, with flash flooding, and often further flooding once the water all moves its way down the rivers, starts to move generally southward.

So after the eastern side of North Queensland suffered the effects of a severe cyclone (Debbie was Category 4, the second-highest category there is),  North Queensland, and very quickly Central Queensland received a great deal of rain.

By yesterday, when I was travelling home, the rain depression was reaching South East Queensland.

So while I was waiting at the airport - my plane was delayed, the a flight to the Gold Coast (further south than Brisbane) was cancelled, the flight after mine to Brisbane was cancelled, and other travellers and I were starting to speculate on what we would do if ours was cancelled.

About that time I told my family members not to drive into Brisbane to get me, I would catch the train to Ipswich, rather than have them drive on potentially flooded roads.

Other friends offered me places to stay in Brisbane in case I couldn't get to Ipswich.

As it turned out, my flight did eventually take off.  We got into Brisbane just before the worst of the rain. By the time I got back to Ipswich the rain was coming down hard.  I was absolutely saturated walking from the train to the car. But I was still home before the worst of it.

As it turns out, I wasn't the only one to get a bit wet.

My ragdoll cat, Percy, had an adventure of his own.

Percy has a routine.  He gets up in the morning, and goes to sleep out in the back yard in the sun, or in the gazebo if it's too hot in the sun.  Then he comes inside to eat, and moves to the couch to sleep, eats some more and goes to bed.

With the rain, going out to the back yard was a much messier affair than usual - so much so that when he came inside, my son found it necessary to give him a bath. (Percy does not like baths.)

So now I'm home, and just about recovered from the journey.  My brain and my notebook are both over-full with news from the conference.

I've got so much to tell you.  Over the next couple of days you're going to see a heap of posts about the conference, but you'll also notice the links to support and information on the Links page getting bigger, as I add in some of the amazing resources that I've found out about.

This is what the creek near my place looks like normally. 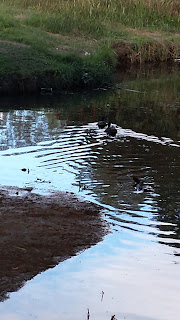 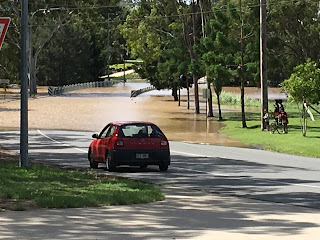 The water was just below the bridge when I got home last night.  (Crossing the bridge was a part of getting home.) 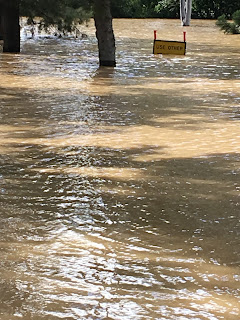 This sign that says "Use Other"  said "Use Other Footpath" before I got out my phone to take the photo.