What's the worst that could happen? 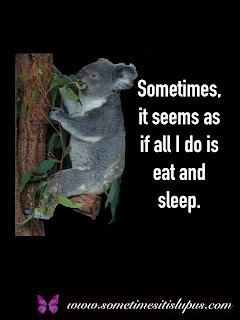 May is a big month for me.

The fourth is my birthday.  (I was 50 this year.)  The second Sunday of the month is Mothers Day. The tenth is World Lupus Day and the sixteenth is the Sometimes, it is Lupus blogiversary (the anniversary of starting the blog.)

Given that it's such a big month, I have actually been doing some things, other than sleep, eat and write.

I went with my family to Australia Zoo on Monday.  That was fun.  Tiring, but fun. It was a couple of days early for my birthday celebration, but it was when family members could make it.

I've always loved to get out and do things that were different from the everyday grind - but there's always been a limit.  I get scared easily. I'm afraid of heights and any number of other things.

Something happened after I was diagnosed - something that you might not expect.  In some sense, I became less afraid, or at least more willing to do things I was afraid of.

Shortly after I was diagnosed (about ten years ago), I took my kids to Aussie World (you might be able to see a theme in family outings over the years. One of the rides there was of a kind I would never have considered going on before.  It went up in the air and spun around, and all the things I have always been afraid of.

The kids wanted me to go on it with them. I looked at it and thought, "What's the absolute worst that could happen?"  I decided the worst that could happen was that the machine could have a catastrophic malfunction and I could end up dead or disabled.  In short, the absolute worst consequences were what lupus was trying to do anyway. The ride had the potential to at least be fun along the way, quite unlike lupus.  So I went.  I was scared, but I had fun too. Then I went on more rides.  I was frightened to a greater or lesser degree on all of them, but I had fun.

Let's duck back to Monday this week, and the birthday presents my kids gave me.  My son is giving me a bigger phone (so my old eyes can see more clearly and my fat, clumsy, fingers can press the right numbers and letters) but I have to wait for that until next time we go to Brisbane.

My daughter gave me a voucher for ... a hot air balloon ride!  Did I mention I'm afraid of heights?  I'm terrified!  But what's the worst that could happen? It's got to be more fun than lupus, right?

Once May's over, I guess I'll go back to doing nothing much except eating, sleeping and writing.
Posted by Iris Carden at 15:55