Well, I must have passed some milestone in the blogging world.

For the first time ever, I received an email, from a company which asked if I would like to review their autumn (obviously they're overseas) skin and haircare range.

I replied, that I'd be interested in any products for extremely sensitive, rash-prone skin.  What arrived in the mail was this: 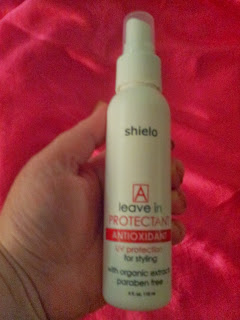 It's Shielo leave in hair protectant.

Now, before I attempt to review the product, perhaps I should explain something about my hair care routine.

After many years of struggling with dermatitis on my scalp and hair falls (and I know lots of lupies know both of those things only too well), I am very fussy about my hair.

I don't go to hairdressers, unless I've been without any scalp or hair problems for a very long time.  I don't trust the chemicals they use, and I'm not sure they sterilize their equipment between customers.

I cut my own hair, keeping it comparatively short so it's less distressing when a handful randomly falls out (it doesn't look as much as if it's long hair.)  I dye it maybe once or twice a year, and again, only if I've been without any scalp or hair problems for ages.  I always use the same brand of dye, rather than risk something unknown.

I only wash my hair once a week, and then I massage a tiny amount of oil into my scalp first, to act as a barrier between my skin and the shampoo and conditioner.  Styling my hair consists of giving it a bit of a scrunch after it's been towel dried, and it naturally falls into waves.

My hair dryer and curling wand still exist somewhere, but haven't been used in at least a decade.

Because of all of that, you might not be surprised to know that I have no idea what a hair protectant is supposed to protect hair from.

I had a long look at the bottle, and read the information on it.  I still didn't know what its purpose in life was.  I asked a friend, but she didn't know either.

My 19 year old son has beautiful waist-length hair.  I asked if I could spray the hair protectant on his hair and see what it did. He looked at the bottle suspiciously and said, "I thought you were writing this review."

The bottle says it's for styling.  So I squirted a little on my hair before I scrunched it after it was washed.  My hair fell into the same waves it always does, with no perceptible difference. So trying it didn't tell me what it does, but I did find out that it doesn't cause an allergic reaction, well not for me, and not at the moment.

It smells quite pleasant. That's got to be a plus.  Unless of course, you're allergic to fragrances.

It says it has UV protection.  I use 50+ sunscreen on my skin, but have never considered UV protection for my hair.  Not that I'm likely to be in the sunlight long enough for it to have any effect on my hair - if I were, I'm sure I'd be suffering from a major lupus flare as a result. So, no, I didn't test out the UV protection claim.

It also says it has antioxidants.  I understand that antioxidants in food are useful in combating free radicals which can cause disease and degeneration.  I don't understand how that applies to hair, which is already dead.

All that said, it smells pleasant, I didn't have a reaction to it (and I react to a lot of things) and the bottle says it's cruelty free, which is always a good thing.  So if you need your hair protected, from whatever dangers there are to hair, I guess this is as good a product as any.
Posted by Iris Carden at 15:18

Email ThisBlogThis!Share to TwitterShare to FacebookShare to Pinterest
Labels: reviews