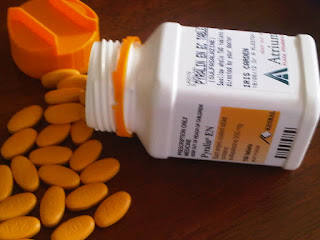 I went to the rheumatologist on Monday.

I've really been missing how well I felt with 15mg of prednisolone in my drug cocktail. I'm down to 5mg now, and with the reduction in steroid, I had an increase in pain and fatigue.

On Monday, the rheumatologist added low dose sulfasalazine into my cocktail instead.

I've had sulfasalazine before - but I'd had it instead of plaquenil. It didn't work as well as plaquenil for me - but this time around, I'm taking it in combination with the plaquenil.

Like most of the drugs in my cocktail, it does have side-effects. It can cause nausea, diarrhea, loss of appetite, and sun-sensitivity. Of course, with those side-effects, that's pretty much half my drug cocktail, so I wouldn't know what was causing it anyway. I did have a very upset stomach for the first couple of days, but I seem to be adapting quite well now.  I also slept for a fair bit of the first two days of taking it - but was sleeping all day most days since my prednisolone was reduced anyway, so that really doesn't mean anything.

What am I hoping for from this new drug? That in combination with all the other drugs I'm taking, it will cut down on my pain and fatigue, and allow me to get through the day with only a short nap.
Posted by Iris Carden at 11:09

Email ThisBlogThis!Share to TwitterShare to FacebookShare to Pinterest
Labels: treatment