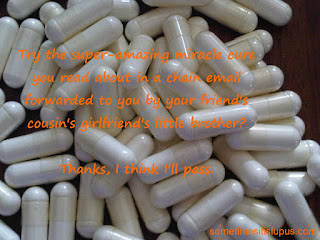 As people recommend them to me, I usually research and see if I can find the truth behind the myth.

Here's some I've looked at so far:

I think it's important to try to sort the truths from the half-truths and total falsehoods. I understand the temptation to grab on to any hope, no matter how flimsy. In a post-modern world, people's opinions are presented as if they were equal to facts (for example the anti-vaccination campaigns - which are not based on myth  - are often treated as equally valuable as the actual scientific evidence in favour of vaccinations.)

But when people's lives are in the balance, we have to look at reality - and the person who gave his child cannabis while the doctors were giving the child chemotherapy - really has no evidence at all to support his case that it was the cannabis (not the chemo) that actually cured the child's cancer. The doctors who have cured many other children with the same cancer using the same chemotherapy regimen have a much stronger case to argue that the chemotherapy should continue to be used with kids with the same cancer.

This post was written as part of Wego Health's National Health Blog Post Month.
Posted by Iris Carden at 08:52