How to Show a Lupie Some Love 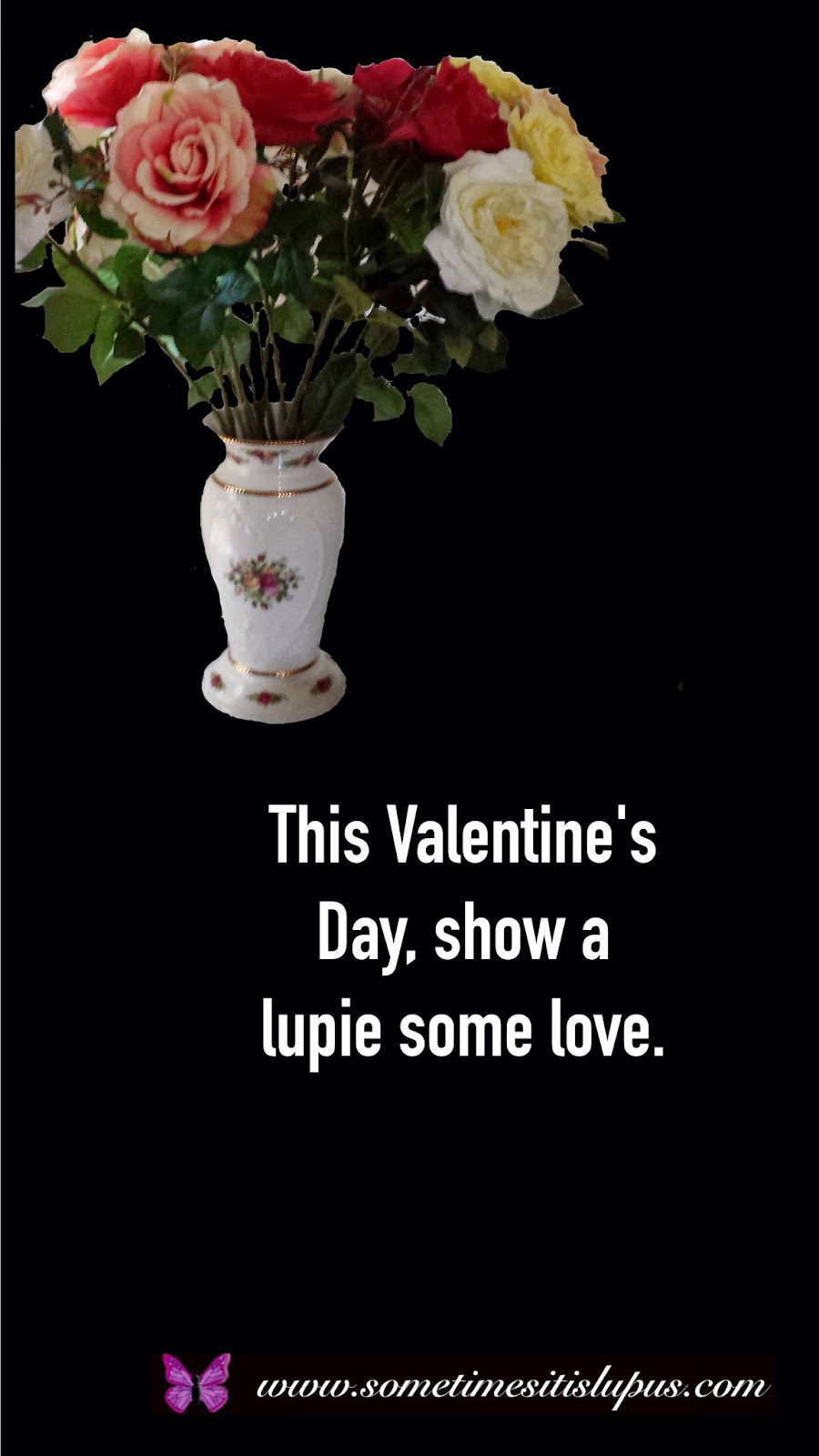 I don't have a romantic relationship at the moment, although I did buy a present for a "special someone". (I bought cute shoes for my grand-daughter.) I do have people in my life who I love very much, and I don't think love really needs to be limited to romantic relationships.

Saint Valentine's message was about God's love, rather than romantic love. It's bigger than just one other person.

So, if you have a lupie in your life, and you want to show them a little extra love for Valentine's Day (or any other day, for that matter), what can you do?

I asked lupies on social media.

Believe it or not, we don't all want flowers and chocolate (although, I'm sure those would be nice, too.)

There were two main themes for answers.

The first was: help with the everyday work. Lovely lupie Twyla pretty much summed this up: Some help cleaning my house would be an amazing gift, it's causing me so much anxiety. I've always had a tidy house even battling lupus for 24yrs. But the last couple of months I have no strength or energy.

Along similar lines, lupies said they'd love premade meals, the washing caught up, and pretty much anything else that would ease the burden of the necessary activities of daily life. Lovely lupie Sarah specified wash, dry AND put away 55 loads of washing.

Cooking a nice meal at home (without the crowds of a restaurant) also got the thumbs up.

The other big theme was a spa day, or similar.  Some suggested massage, one lovely lupie would love a heating pad. There were lupies in favour of manicures and pedicures. (Pedicures are especially valued by those of us who can't reach our own feet anymore.) This doesn't have to be expensive: as lovely lupie Megan said she just wanted chocolate and a hot bubble bath.

There are some lupies who would be grateful just for your time, just to have you turn up and watch a movie or whatever.  There's some who would just love a nice card, and to know you thought of them.

Of course, there's always someone who has different plans. Lovely lupie Pamela's story was unique: I have lupus and heart failure, caused by the lupus, but my husband, in 2007, had a rare tumour in his neck removed. He was the seventh person ever in the world to have had this thing, and was only 36 at the time. He almost died. Luckily he recovered. He was in and out of the hospital the whole year of 2007, and the strain that caused me was unbelievable, especially with a six year old son at home and dealing with my own health issues. His carotid artery burst 10 days post op and we thought we had lost him. But he and I rallied through it and thankfully he's OK now.  His first surgery was on Valentine's Day. So since that day we instead celebrate Happy Tumour Removal Day on February 14th and I make some tumour themed dessert that we then hack into with fiendish delight.  We've had tumour chocolate candies, a tumour cake (with red oozing pudding in the middle), and my favourite... catastrophic haemorrhage over ice cream (with fake, tasty blood  - corn syrup, red dye, and chocolate sauce.) I haven't decided which tumour delight to make this year.

Of course, what we all most want is a cure.  You can't buy that.  But there are lots of institutions working on it, who would be happy for you to donate to them.  And we'd all feel loved, if we had a cure.
Posted by Iris Carden at 17:25