Preparing for Another Attempt at the NDIS

Before the NDIS (National Disability Insurance Scheme) came into being, I had help from a Queensland state government program that provided someone to clean for me at a subsidised rate.  When I was assessed for that scheme, it was decided that enough adults lived with me (my house is actually two flats and my older daughter's family were here as well), that I didn't need help with the yard work.

Then, the NDIS began, and the state government scheme closed down.

In 2019, I applied for the NDIS.  Part way through I gave up in tears.  The process  was overwhelming, and I just couldn't handle it.

I decided I would just get by somehow.

Well, somehow isn't working. There's now only one other adult in the house with me, my younger daughter who is my carer.

Between us we are not keeping on top of housework, and with the very wet summer we're having the yard has become a jungle. (My daughter can manage it in normal times, but it's more than she is able to handle.)

Beyond that, my mobility scooter is having issues, and I have to start thinking about saving to replace it, and it's getting harder and harder for me to get in and out of the shower.  (There's a more accessible shower upstairs, but that would mean getting up the stairs.)

Next year, I absolutely have to start the process of applying for the NDIS over again. I need help.

I would much rather have a job, be able to pay for everything for myself, but that's not going to happen, because I'm inherently unreliable.  I can never say ahead of time whether or not I am going to be able to be well enough.

I write books.  (Yes, you can see I have started advertising them all over my blogs. Get used to seeing them.) That's something I can do on good days, which has the potential to make me and income. So far I've made a loss, but I live in hope.  One day I'd like to be independent of the Disability Pension, to support myself, pay taxes, all the things grown-ups are meant to do.

Since doing the one thing I've found I can do isn't paying bills and isn't helping with the extra costs of things I can't do for myself, I am stuck on the DP, and will have to beg for the NDIS.

I'm far from hopeful, as there are so many news stories lately about people who have far more severe disabilities than mine having their NDIS funding cut (see links below), but I am going to have to try.

This time, I'm going to have to stick with it, no matter how hard it gets.

.Father of severely disabled woman dies, NDIA tells 86-year-old grandmother to look after her.3 hours ago

The Guardian.Perth mother may have to quit work to care for autistic son after NDIS package cut by 70%.Labor accuses Coalition of 'stealth' cuts to disability funding as other ... told Nine News her child's NDIS package had been cut by half,....1 week ago

Sky News Australia.Many short changed after NDIS cutbacks.Many are finding their plans have been drastically cut back. There has been a 21 per cent surge in NDIS appeals to the Administrative Appeals....3 days ago

My latest children's book.  Wendy Watchitt, is available from your favourite online bookshop or from lulu.com/spotlight/IrisCarden. 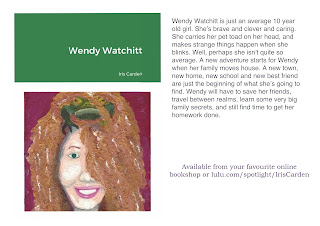