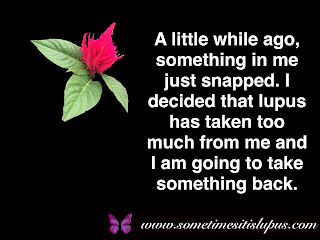 A few things led up to it.

Firstly, because my blood sugar had been bad in recent blood tests, I had been watching what I ate and particularly been eating low glycemic index carbohydrates. I didn't realise I was losing weight, until I had to choose something to wear to my daughter's PhD graduation.  There was an outfit in my wardrobe that I made some time ago, but accidentally made a size too small. I tried it on, and it fit.  This was a particularly (to my mind anyway) stylish outfit with a matching coat and bag.

I loved being that bit thinner, and I loved wearing something I thought looked so good.

Secondly,  I finally started to feel better after all the stress and fatigue involved in the travelling to my brother's funeral.

Thirdly, I joined University of the Third Age, so I could be part of their writers' group.  (I had to quit the group I'd been in since I first moved to Ipswich because another member of the group kept harassing me, refusing to take "no" for an answer, because he thought he could heal lupus.  He wasn't a doctor, but claimed to be some kind of herbalist.)  The U3A writing group is great, and I am thriving in it.

Fourthly, late last year, I discovered the Ipswich Art Society and joined. So I began going to the Art Society to paint with other people who also loved art.

Fifthly,  I've always wanted an embroidery machine.  At last one has become available within my price range.  I have the new Elna Air Artist machine, that is cheaper than the older-style machine, because it's controlled from an iPad app.

I got to the start of January, and was planning to make my usual resolution to not make any New Year's resolutions.

Then something just snapped inside me. I guess all of those background things came together and I realised something.  Lupus has taken a huge chunk of my life, but I had already started,  without thinking about it too much, to take back some things for me.

I decided to intentionally take back some more.

So, I've signed up to do yoga with U3A as well as writing.  I've been to yoga a couple of times, and must confess that I've had to take a fair bit of extra pain relief afterwards.  But, the second time took less pain relief than the first time. Not only that, but I've noticed I'm already walking better: my limp isn't as pronounced. I am feeling good about this.  So I'm going to keep going to yoga, and I'm going to keep taking as much pain relief as it takes to do so.  I spoke to my GP today and she's with me on that - she says that over time, I will probably find I need less and less pain relief.

I also re-joined Weight Watchers.  Thirty years ago, I was a Weight Watchers success story.  A lot has happened since then.  I found a special deal, where I could do the program online for half price for three months.  When I joined, I thought that would be long enough to find out if I could stick to the program, and if I would lose weight despite my lupus medication.  In my first four weeks, I've lost 3.9kg.  The program is much, much easier to stick to than it used to be, and the Weight Watchers app links in with Apple Health so my morning walk, and my yoga session are automatically counted on WW.

I've bought embroidery threads, zips and other materials in bulk on ebay, so that they were cheap.  I
can now use the $2 a metre poplin from Spotlight, to make clothes that don't look cheap, and I am just going to sew stylish new clothes in smaller and smaller sizes until I get to my goal weight.  I'm making bags and even hats to co-ordinate with my new clothes.  I have decided that from now on, I am going to feel good about the things I wear.

Clothes from my wardrobe that I didn't like, that I'd bought because they were cheap and I didn't care how I looked because I felt awful anyway, have either been put in bags for charity if they were in very good condition, or cut up to make cleaning cloths.  Cutting up clothes that are too big or look ugly is a very therapeutic way to dispose of them, and I won't new cleaning cloths for a very, very long time.

Art Society is about to resume after the Christmas break, and I'm stocked up with both oils and watercolours, and am looking forward to Tuesday morning painting sessions.

And because, I feel well, and because I really really miss my ministry work, I've told the local church that I'm available to preach as often as I'm needed for the forseeable future.

I'm not in denial here.  I know I'm not going back to full-time work.  I know I'm never going back to taequando - my days of breaking boards are well and truly over.  But I can make the most of what I am able to do, and I can choose to do, to wear, and to eat the things that make me feel good about being me.

And lupus can kiss my fat (but diminishing) behind.