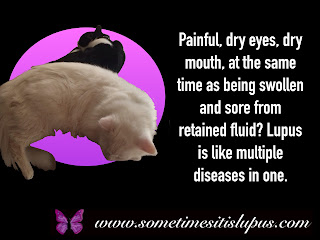 One of the (very many) things about having lupus is that it's possible to have seemingly opposing symptoms at the same time.

Take, for example, last night when I couldn't sleep.

My eyes were so dry they were agonising. You might know what it's like - when your eyes get so dry that any moisture - drops, water, even your own tears when they finally appear - actually burn.

That's the stage my eyes were at.  I'd put in polygel eye gel, and it had hurt and then been absorbed.  (An optometrist once had fun getting my kids to watch as she put drops in my eyes that were absorbed immediately, leaving my eyes still incredibly dry.)

At the same time my mouth was dry.  I felt like my tongue was glued in place.

It wasn't my eyes and mouth that were keeping me awake, however.  My feet and legs were so swollen with retained fluid that they were turning purple and causing agony.

Eventually, I knew I just had to get up and take a fluid tablet, otherwise I'd get the horrible headache I get from fluid retention (that's next after the swelling for me.)

I got the pill and went to swallow it without water, because that's just something I normally do, except it got stuck on the back of my dry mouth.  (Which was more than mildly uncomfortable.)  The stuck pill was unstuck with a drink of water.

After a while, I felt the tingling in my legs that lets me know the fluid's going and the swelling's going down.

Another thing happened, something I've noticed before and asked my rheumatologist about, but he can't explain it.  I started to produce saliva and tears.

I don't know what is happening - perhaps when my body is retaining fluid, it's retaining it everywhere, and when I take the fluid tablet, it just gets squeezed out like squeezing a sponge.

That seems silly, but it's the only explanation I can come up with.  Bodies don't work like that, or do they?

I still didn't get much sleep, I spent most of the night running to the loo. By morning I was about 3kg lighter and felt a whole lot better. Hey lovely lupies, while you're here, why not fill in the Lupus Survey.  Hopefully by World Lupus Day, we'll have discovered some interesting things about people with lupus.
Posted by Iris Carden at 18:41