Anyone want the gold standard treatment for their arthritis?

Gold nanoparticles could be used to build a new class of anti-arthritic drugs that are more effective and have fewer side- effects, according to new research from UOW.


The researchers, led by PhD chemistry student Lloyd James, tested the efficacy of gold nanoparticles in a type of immune cell or white blood cell, called macrophages, which play a significant role in the autoimmune disease, rheumatoid arthritis. 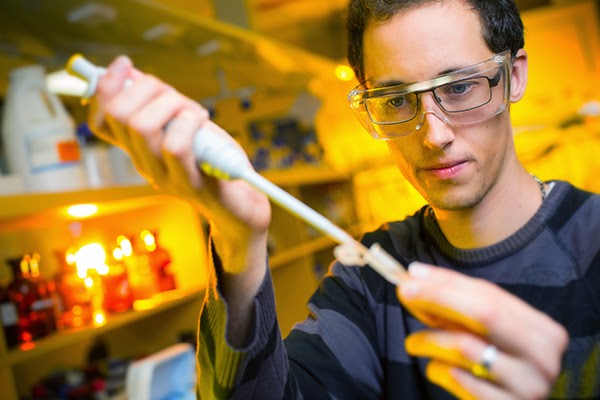 Gold compounds have been used for the treatment of rheumatoid arthritis for approximately 80 years, and are usually given via intramuscular injection. Its use tapered off in the 1990s due to limited efficacy, slow onset of action and numerous side effects, including kidney damage and skin rashes.
However, this latest research shows new promise for the glittery compound.  In their study, recently published in the Journal of Inorganic Biochemisty, the researchers found that by reducing gold into tiny nanoparticles (50 nanometres or 1000 times smaller than the width of a human hair), more gold was absorbed into the cells, with much less toxicity.
“We found that gold nanoparticles were taken up by more cells and in greater quantities than the traditional gold drugs, but without any toxicity which is often associated with negative side effects in clinical therapy,” Lloyd said.
“Effectively, our study found gold nanoparticles didn’t kill immune cells. While cell death is something that you look for, for example in cancer therapies, when it comes to rheumatoid arthritis, cell death can be associated with negative side effects,”


So why does shrinking the size of gold particles boost effectiveness and decrease side effects?
“That’s the million-dollar question,” Lloyd said.
Lloyd and his supervisors think that it may be partially due to there being more gold available in the cell – thousands of tiny nanoparticles compared to just a handful of traditionally sized particles. However this is a question their research is now trying to answer, along with the specifics on just how small the nanoparticles need to be.
The Wollongong-born chemist, who started his undergraduate degree with UOW seven years ago and is hoping to finish his PhD this year, said that while this research is in its early stages, it may eventually show promise for the estimated 445,000 Australians who suffer from rheumatoid arthritis, a painful and incurable condition in which the body starts attacking its own joints.
“It’s very much a possibility that gold nanoparticles could become a potential treatment for rheumatoid arthritis,” Lloyd said, adding that it may be given orally in the future.
“I find that very interesting because gold was one of the early success stories for treating rheumatoid arthritis. And now it’s coming full circle.”
The use of metals for medicinal purposes in actually more common than most people think. Colloidal silver has been used for centuries as an antiseptic, a bismuth compound has been used to quell stomach problems and a platinum drug called cisplatin has been a great success story for chemotherapy.
“Cisplatin is used in the vast majority of testicular cancer cases and has some very successful remission rates. It is now used as a comparison for a lot of other drugs,” Lloyd said.
“I think there is a lot of untapped potential in the medicinal properties of metals.”
This research project also involves Associate Professor Stephen Ralph, Dr Carolyn Dillon, Professor Jenny Beck and Professor Nick Dixon from the School of Chemistry and Dr Ron Sluyter from the School of Biological Sciences.
Reprinted with permission from University of Wollongong.
Original story here.
Posted by Iris Carden at 11:22

Email ThisBlogThis!Share to TwitterShare to FacebookShare to Pinterest
Labels: ask an expert, research