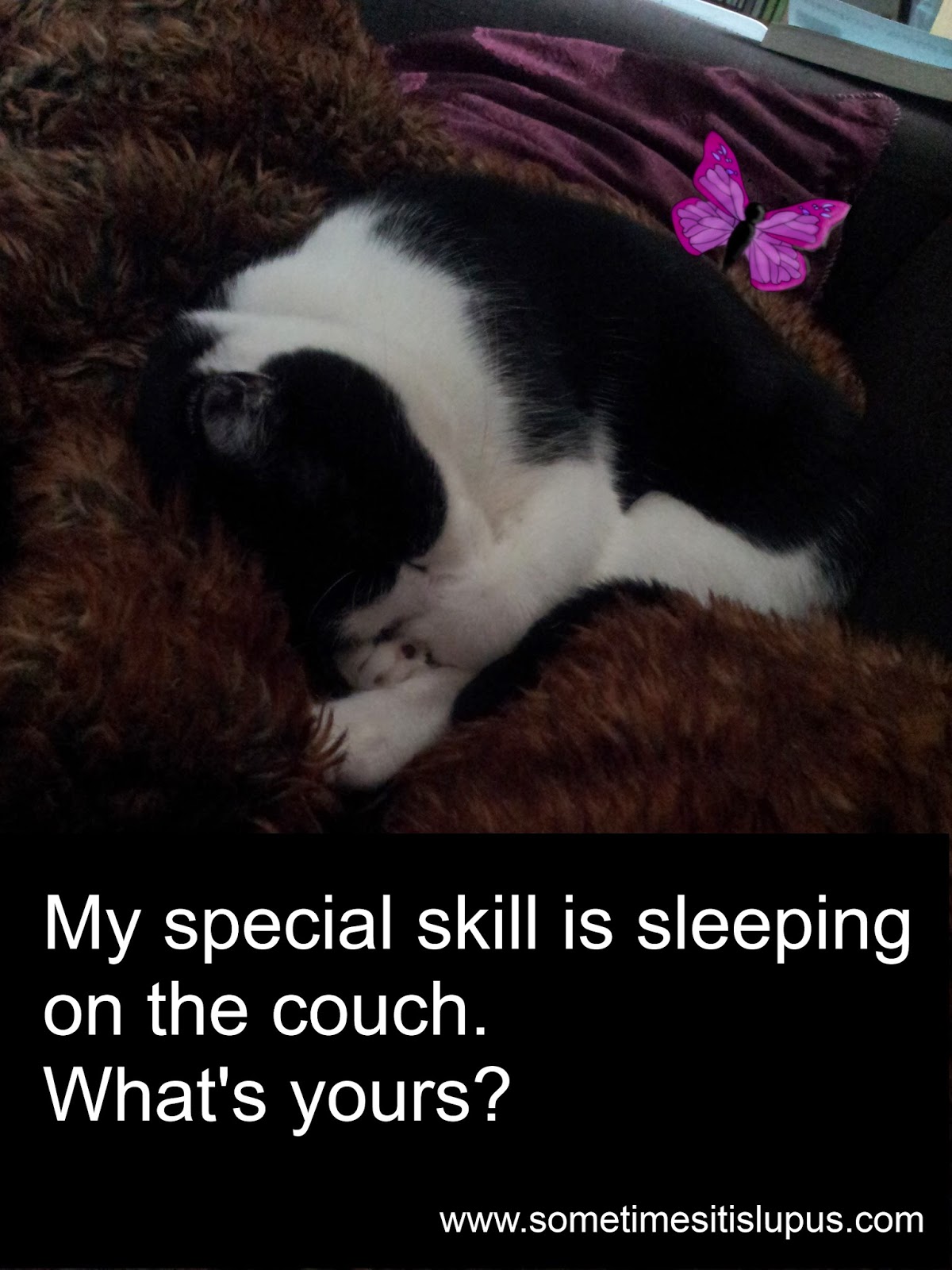 I haven't been online much lately, so I haven't posted much.

What's been going on?

Well, as you would have seen from my previous post, trialing going without sulfasalazine effectively caused a flare. And it's taken a while back on the drug to start feeling even slightly better.

On top of that, I think I've had a cold.  It's hard to tell. I've been hot and cold, sweating and complaining about the heat when the air conditioner was on maximum and my son said it was too cold. I've been tired and sore.  All of those symptoms could just be my little lupus flare.  But my usual rhinitis has been worse, and that's what makes me think I may have had (possibly still have) a cold.

So, for a while, I've been alternating sleeping on the couch with lying on the couch watching tacky detective shows on TV, and the occasional bit of babysitting, just to remind myself there is something in my life that is definitely worth the effort of waking up in the morning.

I have had one other little adventure (or, more accurately, shock.)

I went for my regular three-monthly blood test.

When I was in school, and even in my tertiary studies, I always had a phobia about tests.  I'd know my subject inside out, and I'd do brilliantly on assignments, in practical work or oral presentations, but tests would freak me out. Often, my mind would be full of information before I went into the exam room, and seem to be completely empty as soon as I looked at the question paper.

Some of that anxiety has carried through to other kinds of tests, such as blood tests.  I know I can't study for the blood test, and it's not really a matter of passing or failing, but a lot can count on a blood test.

Over the years I've become used to going, having the blood taken, and hearing in a subsequent regular visit to the doctor that my blood tests were fine, or that I needed a bit more vitamin D, or some other minor, easily-fixed matter. There was never anything that couldn't, or shouldn't, wait for the next visit to the doctor.

That's why I was taken by surprise the morning after blood test when I had a phone call from Dr K (my rheumatologist).  Now, let me make clear just how unnatural this situation is.  In the seven years I have been regularly seeing Dr K, he has never spoken to me on the phone. Once or twice he may have had a receptionist call me with a message, but he's never picked up the telephone, dialed my number, and spoken to me personally.

I must have sounded confused, because after he said his name, he went on to explain who he was. (Or maybe he just doesn't trust my cognitive ability to make that link any more.)

He had called because he wasn't happy with my blood test. Specifically he had some concerns about my liver function test results.

My mind raced.  I'd always been afraid of failing a test. What would happen next? Would there be a make-up test so I could try to do better? Was it just an absolute failure and there'd be some horrible consequence? Was my medication affecting my liver? Was lupus affecting my liver?

As it turns out, there was a make-up test. He told me to go back and do it in a week's time.

I did.  That was days ago. He hasn't called again.  I hope that means I passed.
Posted by Iris Carden at 15:25