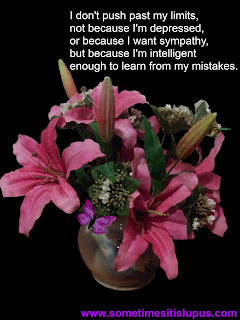 Have you ever heard the phrase "cruel to be kind" used to justify saying something horribly judgmental and usually very offensive.

They say they only want to help.

Have you wondered where the whole "cruel to be kind" thing came from? Which famous psychologist came up with this idea?

Actually, it was Shakespeare.  It was Hamlet talking about having just murdered Polonius. (The being cruel to be kind in the end leads to the deaths of all the key characters.)

Hamlet:
I do repent; but heaven hath pleas'd it so
To punish me with this, and this with me,
That I must be their scourge and minister.
I will bestow him, and will answer well
The death I gave him. So again good night.
I must be cruel only to be kind.
Thus bad begins and worse remains behind.

Usually, when someone tries to be "cruel to be kind", it really is something bad going on.

With lupus patients being challenged to push themselves further, it can be dangerous.  Most of us know our limits, we learn them through hard experience. Pushing past the limits only makes things worse. Physical illnesses, whether depression, cancer, AIDS, or whatever, do put limits on people. You can't make them better by just acting as if they don't exist.

With people with depression, telling them to "just get over it" or to "cheer up" can actually make things worse.  Depression, like other mental illnesses, needs to be treated seriously. Medication and cognitive therapy help, but just being unsympathetic to get the person to "snap out of it" don't help at all.

Being "cruel to be kind" really is just being cruel. Something bad begins and something worse remains behind.

Related posts:
Fatigue and Depression
Lassie, Get Help
The Bottom of the Well