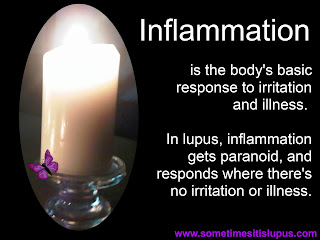 Inflammation - it's a word that lupus patients come to know only too well.

So, I wasn't at all surprised when I went to a physiotherapist about my bad hip to be told I had gluteus medius tendonitis.  The physio explained that this starts with inflammation in the tendon, which then leads to the threads of the tendon not acting correctly and becoming tangled, usually tangling blood vessels and bits of nerve as well. No wonder it hurts.

Yes, something can be done about it, but not easily or quickly.  So I've been seeing the physio once a week and doing exercises at home.  It has helped. I can walk further before I'm in so much pain I need the walking stick.

It won't be perfect, because there is a bit of problem with the joint itself as well. (Of course, the joint problem is caused by inflammation as well.) But it is getting a bit better, and hopefully will continue to get better.

Inflammation has other names, depending on where it appears. You might recognise tonsilitis, rhinitis, hay fever, appendicitis, dermatitis, anything else that ends in -itis.

Personally, I have a long history of tonsilitis, rhinitis, hayfever and dermatitis. I have a short history of appendicitis (I parted company with my appendix on very unfriendly terms very quickly.)

Irritable bowel, another issue many lupies deal with, has recently been found to have a link to inflammation.