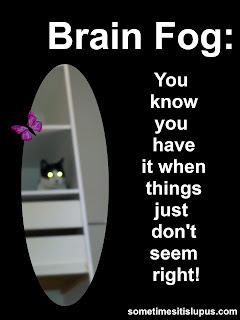 Lupus brain fog (cognitive dysfunction) has been misbehaving for me again lately.

The other day I went out for ingredients to cook dinner.  I was making lasagne, with chocolate brownies for dessert.

After making the sauces for lasagne, I discovered I'd bought a pack of spaghetti instead of lasagne sheets.  It was annoying, but not a disaster, I just layered spaghetti between sauces. It wasn't exactly the same, but it worked.

Then, I found, I only bought one block of chocolate, when I needed two for the brownies.  My son went to the shop to get another one for me. (My family will do anything for chocolate brownies.)

That was not really a disaster.  In fact, there were no really bad consequences. It was annoying and inconvenient, and I was frustrated with myself, but that's all.

Today's incident had the potential to be far worse.  I drove through a red light.

There was a green light to go straight ahead, and I went - around the corner, despite a red turning arrow.  That was the point when my son said we had to stop for a coffee, and after that we were going home for me to have a nap.

Is there a solution to brain fog?  I don't have one yet.  A nap does seem to help a little, but it doesn't fully fix it.

I'm on a waiting list to see a neurologist. Until then, I write everything down, because I can't count on my memory. But cognitive function is more than memory. It's also the endless thinking processes that have to be done all day every day.