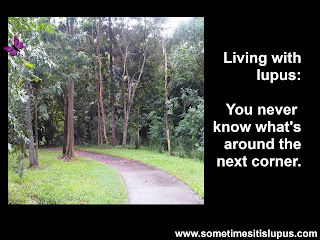 I guess I'd started to realise it was inevitable.

Even so, the phone call came as a shock.

For years now I've been on "temporary retirement".  For some of that I've tried working part-time, but got sick when I did.

So I should have expected that call. The call that left me so shaken that even my teenaged son could see I needed a hug.

The call was from the Beneficiary Fund (the church's superannuation fund for its ministers), saying it was time to do the assessments to go from "temporary" to "permanent" retirement.

In a sense I'd known for ages it had to be coming.

In another sense, I wasn't ready for the actual call.

This means that I'm never likely to be suitable for work again. I'm officially no longer of use. I'm 47, and I know many people dream of retiring early, but they dream of doing it on their own terms, not because some stupid disease has interrupted their plans, their lives.

It makes me look at myself in another light.  I've always defined myself by what I do.  So what if what I do is.... nothing?

Practically, this is a good thing.  Once I've been through my visits to the various doctors (one down, two to go), and the Beneficiary Fund's board has approved it, I will be given a one-off payment that will clear my debts and give me a little money to invest. Then my pension will continue just as it has done through my "temporary retirement".  Clearing my debts will make a huge difference to my budget.  (I ran up debts when I had a full-time job and sufficient income to have paid them out long before now, had things not changed.)

Thinking back to my ordination, how important that was to me, how much it meant in terms of feeling that I was starting out on an adventure in fulfilling God's call on my life - I don't know if I'm ready to hear someone read out the story of my ministry as if it is all over and there is nothing left. (It's called a "minute of appreciation".) It won't be like the stories of people who have lived long and legendary ministries and are retiring to a well-earned rest (probably to keep doing supply work in retirement anyway).  It will be a story that had a beginning, and was just starting to move to its middle and it was just suddenly stopped. Surely the story does not end here.
Posted by Iris Carden at 12:56