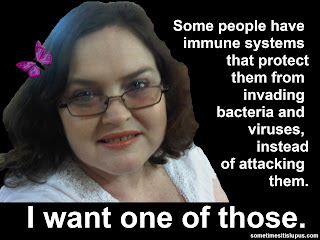 This is the immune system I want:

The immune system is a knight in shining armour, protecting the princess from all of the dangers of the big wide world.

No disease dragons, germ goblins, viral Vikings, bacterial badguys, or other forces of mayhem and nastiness can get to the princess in her castle, while the brave knight is on guard to protect her.

He does his job swiftly and efficiently, with the minimum of damage to the palace.

This is the immune system I have:

The lupus immune system is anything but the knight on protective duty. The lupus knight has rusted armour, and is more than a little insane.

He either ignores the invaders, or over-reacts to things, and knocks down half the palace trying to get to a single germ goblin.

At times, he is so confused he mistakes the princess herself for an invader and attacks her personally.

Wherever he goes he leaves destruction in his wake.
Posted by Iris Carden at 10:11