I haven't felt like eating anything for days, but yesterday afternoon Little Miss from upstairs came for a visit, and asked if we could do some baking.  I was reluctant, but was eventually persuaded, and was glad of it later. We made these lovely little coconut macaroons, which are a favourite in my family, and which did tempt me to eat. I ate, and enjoyed, two of them.

These little delights are half-way between a meringue and a biscuit, a little bit crispy on the outside, and soft and sweet inside.

You'll notice they don't look at all like the "Masterchef" style macaroons which are perfectly round, and sandwiched together with some sort of cream.  This is what I knew as macaroons as a child. 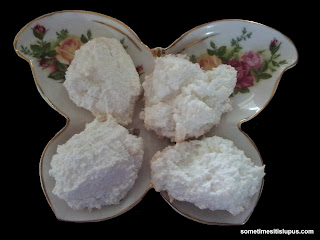 Add sugar, a little at a time, beating with each addition.

Mound teaspoonfuls on the prepared trays.

Bake until lightly browned.  (In my old gas oven this was 12 minutes.  In my new electric oven it's about 15.  Start checking after 10.)

Variation:  If you use shredded coconut, you will get the same taste, but a very different texture and look.

These macaroons are very energy-dense, with lots of carbohydrate and fat as well as a little protein. They are definitely only a "sometimes" food. (In my house a double batch can disappear in an afternoon.)
Posted by Iris Carden at 12:01