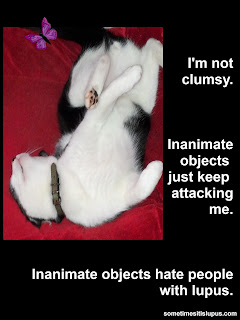 I just want to put it on the record that I'm not clumsy.

It's all the inanimate objects around me.  They have it in for me.  You think I'm paranoid?  No, that's just how it is with lupus.  Ask any lupie, they'll tell you that inanimate objects, and sometimes even gravity, just keep attacking them.

Inanimate objects even go on suicide missions to attack me - plates leap out of the cupboard when I open it, often smashing themselves on the floor, just to get the chance to hit me on the way down there.

Walls leap out in front of me when I'm walking.  I can be going through a nice open doorway when suddenly splat! I've gone face-first into a wall.

Ovens have been known to eject hot trays of food at me.

In fact one day, at a fast food place, an entire tray of food and drinks lept out of my hands and ended up over my son.  He doesn't let me carry the tray any more - not because I can't carry trays, but because trays can't be trusted. (We did discover that his new phone, advertised as waterproof, was definitely cola-proof.)

Floors stay flat for most people. For lupies, they've been known to bend and bunch up so there's always something to trip on. (In my house, that's made worse by two small animate objects with hair and four legs which also get under my feet, so I'm trying to negotiate my way between a floor that won't stay flat, and small bodies that run under my feet.)

So if you see a lupie covered with bruises, scrapes, and scald marks, don't assume we've been getting into fights.  We're innocent victims.  It's the inanimate objects.  If they ever get organised, we're in real trouble.
Posted by Iris Carden at 09:41