The Price of Pills 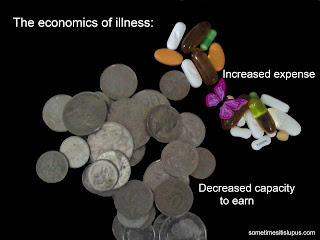 My son came with me to the chemist on Monday.  He hasn't been there for a while.

He was OK with the chemist pulling out my file of repeats and watching us go through all of them and look at what I was low on. And he was OK with the basket of boxes and bottles of pills that she handed over - after all, he's seen my medication drawer.

What shocked him was the check-out, where it all added up to $175.

Actually, sometimes it costs more. Plaquenil and methotrexate last me a long time, so I don't need them every month.

Being on a pension, I have a concession card. That means my PBS (Pharmaceutical Benefits Scheme - federal government subsidy for prescription medicines) prescriptions are only about $6 each. I know of at least one other lupie who has missed out on a concession card because her husband earns a couple of dollars a week too much for the health care card limit. That means she has to pay the full PBS scheduled fee for each drug (up to about five times what I pay.) Of course, even at the full scheduled fee, the government is subsidising medications to some degree.

In other countries, subsidies and supports for people on lupus medications don't cover everyone in the way the PBS does here.

The frightening thing, is that I do hear from lupies who go without medication because they just can't afford it. Money stands in the way of them having their lupus kept under any kind of control.
Posted by Iris Carden at 09:36