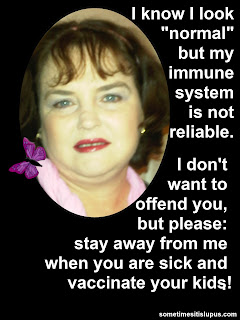 We have over-active immune systems that attack our own bodies.

To counter-act that, we have immunosuppressant drugs, which can stop our immune systems from doing their normal job of protecting our bodies from attack.

Now that the weather's suddenly got cold here in Brisbane, people are going to be indoors more, which leads to sharing germs and all the colds and flus that follow on from that.

Please, if you get sick with something that is "going around", avoid anyone you know with lupus, or any other autoimmune condition that causes them to be on immunosuppressant drugs, or have their immune system compromised in any other way.

One of the most important things you can do to support people with lupus (and similar conditions) is to avoid making us sick.

If you're sick, staying home from work isn't "giving in to it", or a sign of weakness. It's a sign you've got the common sense to not spread the bug further than necessary. (Of course, that also means staying home from other things as well as work.)

There's also an anti-vaccination going on in Australia.  They're loud, but thankfully, don't really have much of an influence on vaccination statistics.   It's sad that in a country where vaccines are readily available, there are people who deny their children access to them.  I'm sure parents in countries where it's hard to get vaccines would consider that insane.  But, in countries where it's hard to get vaccines, people are used to seeing children die from things that are preventable. I hope we don't have to see that happening here in Australia before common sense will prevail again.

Those who don't vaccinate their children, are not just risking their own children, however.  There is a thing called "herd immunity".  If enough people are vaccinated against a particular disease, it becomes virtually impossible for that disease to get a foothold in the population. "Herd immunity" means that vaccinating a child doesn't just protect that individual child - it also helps protect all of the people in the population who are on immunosuppressant drugs, or have AIDS, or have weakened immune systems for other reasons - because it helps prevent the disease spreading.

I say vaccinate your children, because children spread disease faster than any other part of the population, but if you're an adult and weren't vaccinated as a child, see your doctor. It's probably not too late to protect yourself, and everyone around you.