Cold or Flu? Stay Home and Save a Life 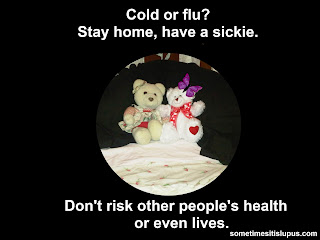 It's cold and flu season.  And the ads have started on television telling us that if you pop a couple of
pills, you can carry on with your normal daily activity.

In fact, some people seem to think there's some sort of virtue in "soldiering on".

Let me tell you something about soldiers, they may be trained to kill, but they don't set out to kill people indiscriminately.

When I published an earlier post about Other People's Germs, there was a huge response on the Sometimes, it is Lupus Facebook page, including a comment from someone who had ended up in Intensive Care because someone with a cold had visited them. The visitor had been feeling better and didn't know they were still contagious. I was told of other lupus patients who died from cold or flu.


An older version of the "soldier on" ad.


In Australia, industrial awards allow for people to take sick leave - you get to take a couple of days off if you're genuinely sick, and you get paid for it.  For some reason, we have this bizarre idea that going to work sick instead of taking a legitimate sickie is something good to do. But conversely there's also a culture of "chucking a sickie" when not sick just to have a day off.

I'm not saying don't take your cold and flu tablets.  I'm all for relieving symptoms, and being comfortable.  But don't be comfortable and go outside, and breathe on things and touch things, and sneeze and cough on things, leaving rhinoviruses on public transport and door handles, and hand rails and money and all sorts of other things people can't avoid touching.

Be comfortable and stay home, read a book, listen to music, watch a movie (but one you already have at home, don't go out to the video shop.) Go to bed and rest, letting your immune system do its job of fighting off the invader.

Don't go out and spread your cold or flu to other people.  Don't turn your problem into a dozen other people's problem.  Don't risk giving it to someone whose immune system may be compromised.  Don't risk being responsible for someone else becoming critically ill, or even dying.

If you want to do something virtuous and heroic, don't go to work when you're sick.  Stay home, have a sickie, save a life.
Posted by Iris Carden at 10:06