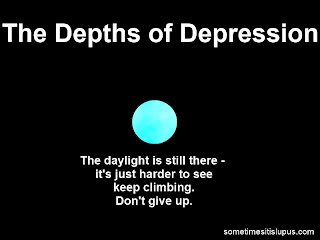 Depression is a pretty common experience for people with chronic illnesses.

There is an element of "this is the circumstance I'm in, and if I look at it in another way and use CBT (cognitive behavioural therapy) skills, I can work my way out of it."  But there's also, for me at least, often a need for the medication as well.  I know there was once a stigma about taking anti-depressant medication, but honestly, I can't see depression as all that different from any of my other symptoms and I take medication for them, so why not this one as well?

For me, depression is something I can visualise as like being at the bottom of a deep pit or well. There's daylight up there, but it's just so far away. (And the worse things seem, the further away it is. ) When I'm in the bottom of the pit, I can understand how some people can give up and decide it's all too much.

I can't give up. Too many people would be hurt if I did.

So, I have to climb, no matter how hard it is, to drag myself out of the pit.

The tools I use are prayer, medication, and cognitive therapy.

Cognitive therapy works on the idea that how we think about a thing affects how we feel about it. Sometimes we have to look at our thoughts and assumptions and realise that they're faulty, before we can feel better about them.  One of the best resources I have found for an introduction to cognitive therapy is Dr David Burns' book Feeling Good: The New Mood Therapy.

Here's a quick summary of the kinds of faulty thinking that lead to depression:

A lot of depression can be tracked back to these faulty thought patterns. Sometimes, just doing the work of thinking through all the things that have happened lately and how I have thought about them and how that has led me to how I am feeling, can be all I need to do to climb out of the pit.

Sometimes, I realise that the "depression" isn't really "depression" at all. I'm just "feeling lousy" because I'm physically in a lupus flare, and the best thing to do about it is to go back to bed until I feel better. That happens in the real world, too.

Depressed? Need someone to talk to?  From anywhere in Australia call Lifeline on 131114.