Missed the Goal, But Got Something Better 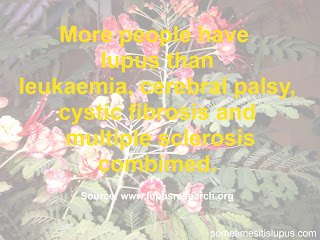 I just looked back at my first ever blog post, written almost two years ago.  It has had 32 page views. Now, Sometimes, it is Lupus gets up to 600 page views a day. So, I guess I've come a long way.

I've been trying to work out if I've achieved what I set out to do, and realised that I really didn't set very clear, measurable goals.

My early goal was to "increase lupus awareness". I don't know for sure how I can measure that.  I know of one person who is a regular reader, who doesn't have lupus and didn't know about it when she came to this blog (via my cat's blog) and now is a strong supporter of lupus patients in her own country.  So I guess I've increased awareness by at least one person.

I also thought maybe I could make a little extra money by blogging. I've earned $25 with my one and only sponsored post. In theory, I make money when people click the ads on my site, but that only gets paid when  it builds up to $150. At the rate that is going, I'm on target to get paid in another five to ten years.

I added in a goal to help people with lupus and other chronic illnesses who run their own businesses, by building the Lupus Business Directory. Today, I asked on the Sometimes, it is Lupus Facebook Page if anyone had ever bought anything from a business listed in the directory - two people responded. And I've bought stuff out of the directory, so that's three of us.

If you look at what my early goals were, and what can be measured from them, this whole project has been a very limited success, if not a complete failure.

But something else has happened along the way. Something I didn't set as a goal, because I just hadn't thought of it.  A community has formed.  People read this blog and remember that they're not alone fighting this horrible condition. They share their stories on the Sometimes, it is Lupus Facebook page, and give each other the benefit of their experience, and the encouragement needed to deal with the challenges they face. It's a community where we all find someone who understands what it's like.

I can't measure the actual size of that community, but there are some indications of it - there's more than 1400 people following the Sometimes, it is Lupus Facebook page, and as I said earlier, the blog gets up to 600 pageviews a day.

That's probably not a lot in terms of the on-line world, but those numbers represent actual people, and just one person would be worth the work I do.

So I may not have achieved what I set out to do. But I'm fairly sure something worthwhile is going on here, so I'll keep going and see what happens.
Posted by Iris Carden at 13:12