Is It Snake Oil? 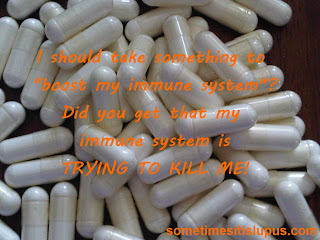 Lupus patients (and people with other chronic illnesses) get so many suggestions from well-meaning people about "treatments" or even "cures" for our condition. Sometimes, it's another lupie, who has had a good experience with a change of meds, and it may well be that something similar will help us, but far more often, it's snake oil.

When I hear about these things, I often check what the actual research is into the background. Often, it's something like Low Dose Naltrexone, or Stem Cell Therapy, that has shown some promising results in early research, but has a long way to go before it's actually proven whether it will be effective or not. Some will be things that had very mixed results in early testing and may actually be dangerous in some cases, such as "Cannabis cures all cancers".  And there will be some, such as mixes of vitamins, etc, that will probably have no effect at all.

Here are some quick ways to identify that something is more likely to be snake oil, than an actual, proven, treatment.


Problogger is currently encouraging bloggers to write a "How To" post as part of a group writing project.
Posted by Iris Carden at 10:46