As Hurricane Sandy is threatening the USA (well, part of it, I really don't have much idea of American geography), it's a timely reminder that summer storm season is on its way here too. (For those who don't know, I'm in Brisbane, on the east coast of Australia.)

A few years ago, when I was still in hospital chaplaincy, I went to a disaster recovery conference, and spent three days learning the current best practice in disaster recovery.  About a week after that we had what became known as "supercell Sunday" when what is variously described as a supercell storm, or a mini-cyclone, hit my suburb of Keperra, and some of the suburbs around it.  The suburb that gained the most publicity - which Brisbane people will probably remember - was The Gap. The Gap had the honour of having the worst of the damage.

It was amazing to me to watch everything I'd just learned about swing into action around me. It was also amazing to me just how unprepared I was, even though I'd been saying for a week, "We really should get a disaster preparedness kit ready."

So, here's what I learned, from the course, and from personal experience.

There is no substitute for being prepared ahead of time.

Before storm season begins, so now in Spring, is time to make sure we have everything we're likely to need.

A battery-powered radio, with spare batteries is essential.  We were without power for several days, and the only way to get news and information was with a radio.  It's also handy, here in Australia, to know what your local ABC (Australian Broadcasting Corporation) radio frequency is.  The ABC has portable broadcast towers that can be moved into position anywhere in the country if the normal tower is down, and it has the ability to isolate just the disaster area so as to broadcast information that the area needs without affecting programming to places. Don't do what we did, and go shopping for the radio after the storm has hit - they sell out very fast.

Some bottled water is essential.  When I was a kid, every time there was a cyclone expected my mother would fill sinks and the bathtub with water in case the water supply was cut off. You can do that if you know when the cyclone is expected to hit.  When a storm comes with no warning, it kind of doesn't work.  While I object to paying for bottles of water normally, it's handy to have one or two of the biggest container of water you can buy stored around the house somewhere, just in case.  Be aware that even bottled water has a use by date, so check it before the start of each new storm season, and if necessary replace it. Again, bottled water sold out very fast from the shops that were open. (Our local shopping centre lost its roof, so we had to go further afield.)

Food is also quite a good idea. Remember if you're without power for a week, that means no refrigeration or freezer for that time. So it is handy to have canned and dried foods available, along with powdered or long-life milks. We were fortunate that we have a stove with bottled gas, so we had the ability to cook. Mains gas supplies can be cut of in a disaster, just as electricity and water can.  If you're reliant on electricity or mains gas for cooking - make sure you have a supply of foods you can eat without cooking them.

And the big thing for those of us with chronic illnesses: make sure you keep ahead of your medication.  Throughout storm season, you really need to be sure you have medications for at least a week ahead. If the roads are cut and you can't get to the chemist, you have a big problem.

There is lots of help available in a disaster - but the more independent you can be the better.  For example, in best practice there will be a door-to-door check to ensure everyone is alive and safe.  After the storm, that check came about 48 hours after the event, and the poor young soldier who came to check on us looked like he hadn't slept at all in that time. There are two lessons from that, the first is if you're just waiting for help, it will come, but it will be probably be a while, and the second is that the rescuers are overburdened as it is so it's a good idea to avoid making extra work for them.

And if you can, help each other. People I didn't know came along and cut up the tree that was across my driveway so it could be taken away. They weren't part of the official recovery effort, just people from the neighbourhood who happened to own chainsaws. That meant my driveway was clear only a couple of hours after the storm. The official recovery effort reached our suburb days after - because the disaster in the next suburb was worse and therefore more urgent. We're not an especially close-knit neighbourhood. I still don't know my neighbours' names. But after the storm, everyone just helped out each other as they were able. 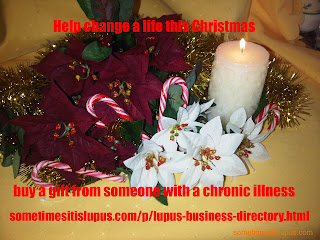 Find some great Christmas gift ideas in the Business Directory.
Posted by Iris Carden at 08:28