Health Writer's Month: Back to the Beginning

Today's Health Writer's Month topic is: The First Time I… Write a post about the first time you did something. What is it? What was it like? What did you learn from it?

I have had so many "firsts" since I started this whole lupus activism thing. But the big first was of course that very first post, almost a year ago. It was the 16th of May last year, and I was complaining about the late autumn cold making my joints hurt.

So far, that post has had a total of 18 page views.  My blog was definitely launched - with no fanfare and no idea of what I was doing - and very little audience.

Going back almost a week before that first post - the 10th of May, had been World Lupus Day.  I joked on Facebook that the way to celebrate was with a handful of painkillers and a long nap. Over the next couple of days that bothered me.  I've always worked to the idea that if I saw a problem I should do something about it, not just complain.

The problem I saw was that lupus wasn't widely understood or recognised - there's huge public awareness campaigns about diseases like breast cancer, which is fair enough, and those campaigns lead to dollars invested in research into better treatments, better patient outcomes. It's not that I resent the "popular" diseases, it's just that I think lupus ought to get that same attention. We need people creating awareness, making it cool to put money into researching our condition: but whose got that kind of energy?

I'm a former journalist, and I'm a Christian minister. What I know how to do is communicate. So to me it made sense that my contribution would be to talk about lupus to anyone who would listen.

One of the first things I learned, of course, is that people don't read blogs they don't know about. I had to learn to use social media - twitter, Google Plus, and have recently even given this blog its own separate Facebook and Google Plus pages. Each new piece of social media has meant just a little more work - but it's also put me in contact with some amazing people I never would have met otherwise. It's how I discovered I wasn't alone in this project, and discovered that all over the world, there are people like me, trying to make the world aware of what it is like to live with lupus.

In some sense, I feel that my lupus blog is a vocation, very much like my call to ministry. I do hope that in some way God does use what I do online to help make life better for people with lupus. 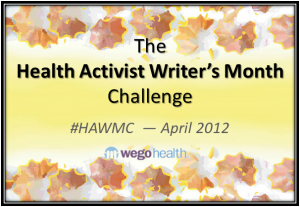