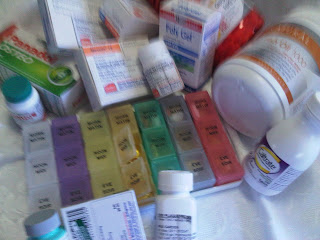 I was sorting my medications for the week, and thought perhaps people might like to know what kinds of medications Lupus patients need to take.

This is my current cocktail - it's been tweaked a bit over the time.

Fish Oil - my rheumatologist just increased this to 10 capsules per day (someone joked the oil was to lubricate all those stiff joints)
Glucosamine - I think it's ground up seashells or something similar, also supposed to be good for arthritis.
Panadol Osteo - like regular paracetamol, only stronger and longer-lasting
Prednisolone - a steroid, to reduce inflammation, and slow down the immune system. I've had doses as high as 25mg per day, and am happy to be down to 2mg.
Zanidip - to lower blood pressure (my blood pressure was fine until I started taking steroids)
Plaquenil - actually an antimalarial, but helps with lupus as well
Lovan - usually an antidepressant, given to me as a weight loss drug
Methotrexate - in cancer patients, this is given in frequent high doses over a short time and called chemotherapy. In Lupus patients, it's given in weekly, low doses, over a long period of time and called an immunosuppressant.
Folate - to replace what the methotrexate leaches out of the system.
Vitamin D - because you're supposed to get it from sunlight, but sunlight doesn't agree with lupus patients.
Antihistamine - because even with all the other drugs supposed to slow down immune system reactions, I still get allergic rhinitis!
Polygel - goo for permanently dry eyes. (At least I don't get the dry mouth some lupus patients have - I'd hate to be using artificial saliva!)
Asthma puffer - actually hardly used this since starting prednisolone.
Movalis - non-steroidal anti-inflammatory
Lasix - diuretic, just occasionally, because sometimes all the other drugs can cause my body to retain enough fluid to cause severe headaches.

That's my list. Other lupus patients will have different lists, especially people who have more severe lupus. (Mine is very mild - even if I have had two years off work because of it. At a Lupus Australia drop in morning, I met a man whose first symptom was heart failure - that's severe lupus.)

Because Lupus can attack any organ of the body, lupus patients can suffer from a huge variety of symptoms, and many will have to take medication targeted specifically for the organ that is under attack.

Usually, I pack my drugs into a dispenser box, sorted by day and time. When I went on an overseas cruise a couple of years ago, I had to take everything in its original package, with the prescription label. I took an extra bag for my medication.
Posted by Iris Carden at 09:08

Email ThisBlogThis!Share to TwitterShare to FacebookShare to Pinterest
Labels: treatment